Romance is in the Air! Pope Francis's Visit 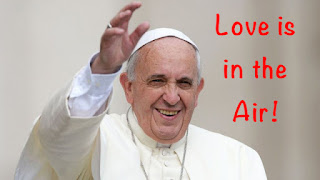 BRACING OURSELVES FOR A WAVE OF ROMAN MYSTIQUE!

Our new mom took on the task of raising five children after the loss of our birth mother.   Her relatives and friends became ours, including a slightly older little girl with just the right mix of freckles, hair and beautiful eyes to turn any eight year old boy’s head. I do believe I would have married that girl on the spot had it not been for the unwritten law against liking girls that all  card carrying eight year old boys must follow, along with a few other State laws.  Oh yes, and there was one problem even greater.  Our new step mom, who had an unholy fear that one of her charges would marry a Catholic ,was not going to let it happen on her watch.
I have not forgotten the passioned admonitions concerning Catholic beauties which my twin and I endured as we grew up. My mother took no prisoners.  She said we would find that they were the most beautiful, the best of friends and companions, and that they would share many of our family values. They were the good girls and the fun girls.  She also reminded us that, should we cave, we would face the prospect of raising our children as Catholics, a promise all good Catholic girls require from their suitors.  In her perception, good Catholic girls had a mystique,(a mystery or charm that does not correspond to truth) and frankly, from my young perspective, she was right.
Whether mom was right or wrong, the fact is Rome itself does have a mystique which defies reason.  Americans are about to witness that papal aura first hand.  Millions will usher in an affable leader whose presence will be loved by most and felt by all.  In spite of a church which has been ridden by scandal both moral and fiduciary, a Vatican famous for its intrigue, and a political stance which is clearly pro Muslim and anti Israel, Rome will exude a beckoning persona which will mesmerize millions in the bask in her glow.

New Couple in the Neighborhood

Along with her followers, Rome will gladly parade with an entourage of evangelical leaders who will have a stronger crush on her than any eight year old boy encountering his first beauty.  They will openly confess their love and would, in truth, marry Rome, if their evangelical pacts and laws would allow.
Those walls which once separated Rome and evangelicalism are being systematically dismantled.  The rules are changing at a fundamental level.  This is no mere dalliance.  The scent of matrimony pervades the air. Though this forbidden love is still somewhat secret, like all true loves, it will not be repressed.

The fundamental change has taken place with respect to the one underlying issue which has keep the Protestant boy and the Catholic girl apart for so long. We refer to the erosion of the doctrine of justification by faith.
No good Catholic will deny the term “justification by faith”, and no good non Catholic believer will deny it either.  The problem is that we use the same term to reflect opposite views. A Bible believing non Catholic believes that we are saved by grace through faith alone in the finished work of Christ. He takes Ephesians 2:8-10 very seriously:
For by grace are ye saved through faith; and that not of yourselves: it is the gift of God:  Not of works, lest any man should boast. For we are his workmanship, created in Christ Jesus unto good works, which God hath before ordained that we should walk in them.
The non Catholic believer knows that he was justified once and for all when he came to Christ.  In fact, he points out that every Bible passage on justification speaks  of it as a one time, once and for all event. Romans 5:1:
Therefore being justified by faith, we have peace with God through our Lord Jesus Christ.
Those words being justified are in the aorist tense. This requires that we read it “Therefore having been justified...”
By definition, justification is the legal (forensic) act of God whereby He declares us to be righteous. Period. End of story.  God reckons righteousness to our account when we appropriate by faith what Jesus Christ did for us on the cross.

By definition: Infused (or imparted) righteousness is a non biblical term which suggests that God continues to impart a transient righteousness to us on an ongoing basis, based upon our obedience. Thus, it is works based.
It is important for the Bible believer to understand that there is no such thing as infused or imparted righteousness that flows from this legal imputation of our righteousness into our being. We strive daily to be found in the practical outworking of the righteousness which is in Christ, but this, in no way, relates to our justification before God.  It is the work of the Holy Spirit who molds us in the image of the indwelling Christ. We share the righteousness of Christ practically as a result of our placement in Christ’s body. Again, this practical righteousness does not result directly from imputation. It is the result of the indwelling Christ.
Rome believes that justification began in the past and is ongoing. Justification is past, ongoing, and will consummate in the future. Try to wrap your thinking around this: Rome sees both legal and practical righteousness as being infused on an ongoing basis.  Men must continually avail themselves of the sacrifice of Christ sacramentally in order to perpetuate their ongoing legal and practical states of salvation.  In other words, in Romish math, Salvation = Grace + Works. Biblical non Catholics say Salvation = Grace alone through Faith in Christ alone. In other words, there is no math. The Catholic argues (enigmatically) that meritorious works could not justify us initially, but meritorious, or faith-works, justify us now and perpetuate our salvation.  So says Rome1..

The New Protestant Evangelicals. Evangelicals are now mashing the biblical doctrine of once for all imputation with the Catholic (Augustinian) doctrine of  ongoing  infusion and impartation. Protestant Evangelicals are actually using Rome’s logic and rhetoric! These evangelicals are not denying justification by faith, they are corrupting it through slow re-definition.
John Piper has argued that we diminish the imputation of Christ’s righteousness when we do not see its practical outworking. In other words, what Bible believers say is forensic only, Piper says, must also be practical. The Bible says that we derive practical righteousness from indwelling Christ through the indwelling Spirit. Piper argues otherwise (as must all who would consistently argue the perseverance of the saints.). Those who do not hold Piper’s view are said to “diminish the doctrine of justification by faith!”
And, do we really care?  Of course we do, because this plays out in our lives.  For example, this does great damage to the doctrine of assurance. Consider harm this has done to John Piper, a sincere man of God. In the context of this discussion he has stated “...why I sin against my wife the same at age sixty-two that I did at age forty-two causes me to sometimes doubt my salvation.”  Maybe, its vice versa.  Maybe his lack of assurance, brought about by his faulty doctrine of infusion is hindering the work of grace in his heart.  In any case, the idea that imputed righteousness necessitates infused righteousness is what drives the Reformed doctrine of perseverance and robs believers of being absolutely and completely sure of their relationship to Christ. Our security in Christ comes from our imputed righteousness alone, never from our practical experience (thank God!). Our awareness of that security can be clouded, but our security is impregnable.
Piper is not alone. The new theory which seeks to mash forensic and practical justification is emerging in evangelical circles. Philip Congdon (my go to source for the quotes in this article) points out the more current work of Paul Rainbow and Richard Gaffin2. These men are teaching that there is an “initial justification” and a “final justification” which depends on “works of grace.”  The only remaining difference between this Reformed view and the Catholic view is the issue over priestly sacraments!  Both views are works based.
Once we mash the concepts of justification and “faith works” we have fallen under the siren song of Rome.  Both the doctrines of Lordship Salvation and Perseverance of the saints confuse legal justification with practical righteousness.
John MacArthur, another Reformed teacher has played right into the hands of Rome in his book Faith Works where he declares “Meritorious works  have nothing to do with faith, but faith works have everything to do with it.”    Works are works. If we are to believe MacArthur there are two kinds of works, meritorious works and faith works.  No serious Catholic theologian would  disagree with him.  This is what Rome has been saying all along. Lest the reader think we are putting words into John MacArthur’s mouth consider this quotation from his book Hard to Believe:
“Salvation isn’t the result of an intellectual exercise. It comes from a life lived in obedience and service to Christ...The life we live...determines our eternal destiny2.
Dear reader. Believing God for your salvation is a far higher and nobler event than a mere intellectual exercise. And a life lived in obedience and service to Christ will not move you one inch closer to heaven!

Its OK to Break the Engagement!

May God save us from anyone, inside or outside the ranks of biblical Christianity, friend or foe, who would diminish the glorious doctrine of justification by faith by soiling  our own wedding dress with any kind of works - call them meritorious or faith works.  Dear friend, by definition, a mystique is a fascinating aura of mystery. Do not be lured or deceived by the siren song of Rome.  Rest assured in the finished work of Christ, and rest completely!
Hebrews 4:10-11:
For he that is entered into his rest, he also hath ceased from his own works, as God did from his. Let us labour therefore to enter into that rest, lest any man fall after the same example of unbelief.
1.Other issues arise, after this, of course, as Rome claims to own the priesthood which administers the sacrifice of Christ, but the core issue is that justification is not a once for all event in Catholic thinking.
2. The direct quotations in this paper from Piper, Rainbow, and Gaffin and John MacArthur are all sourced and documented from the same paper by Philip F. Conglon from New Braunfels Bible Church, in John Piper’s Diminished Doctrine of Justification and Assurance is published by the Journal of the Grace Evangelical Society and is available from numerous sources on the Internet.
at September 19, 2015 No comments: