Are You a Closet Humanist? 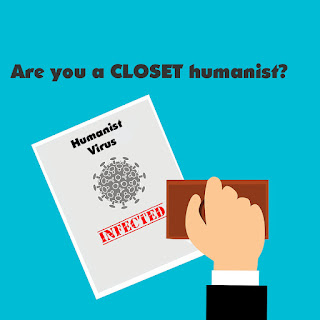 Are You a Closet Humanist?

The obvious secular humanist. The United States of America is a republican form of government that was founded on democratic principles. While it was admittedly a pluralistic form of government, it was clearly based upon biblical principles (often called Judeo-Christian values.) From the onset, we were warned that democracy is not a free-standing system. It must be based upon values which are collectively embraced. It is important to note that we are a pluralistic nation because not one, but two value systems have been present from the beginning and are clearly represented in our documents and symbology. The one was essentially humanistic. This belief is represented in the fundamental premise that, given enough light, man can find his own way[1]. The other, more dominant value system was absolutist and committed to the morality imposed upon us by the God of the Bible. The pendulum has now shifted in favor of the humanist and the premise that there is fundamental goodness in man is now being tested fully. Here is the catch. Like adolescents who are embarrassed by their parents, humanists have been woefully ignorant of the halo effect of the moral heritage which has been theirs to enjoy. That halo is fast fading. While we wish no ill will on humanists, they are pretty much on their own now, and the now prolific cultivation of relativism will soon produce its own serpentine fruit. However, we now address a more subtle form of humanism.

The elusive religious Humanist. There is another humanistic tendency which is equally as serious among Bible believers. Again, there two groups. It may surprise some that these groups have been present with us throughout history. One group begins with the premise that the Bible may be taken literally, and that the metaphors and figures of speech found within it must always be subject to the plain and simple literal statements of the Bible. Bible students are aware that premillennialists form the core of this group and that Dispensationalism is nothing more than a systematic effort to take all of God’s Word literally. To articulate its world view, this group then applies the literal scriptures, recognizes that the covenants made between God and men (and their seed) are both literal and foundational to all biblical thought, and understands those covenants relative to what Jesus Christ is doing in any period of history. It is no surprise that Dispensationalism is most often mocked because of its simplicity. There is no requisite for theological creativity and great church fathers here, because once we begin following the path of literal interpretation, we all inevitably end up with the same broad scriptural framework.

The second group of interpreters comes in a wide variety, but all Bible interpreters inside this group share a common starting point. To greater or lesser extents, each interpreter or group of interpreters embeds the leaven of allegorical interpretation into a select framework of literal biblical statements. Augustine, of course, was the most well-known proponent of this system and those who name him as their theological father exhibit those same traits. To summarize, one is either a literal interpreter or he adds a generous mix of allegorical interpretation into his belief system. He allegorizes certain passages and definitions in an effort to make his system consistent. No serious Calvinist, for example, would claim that he interprets the scriptures literally, far less a scholarly Roman Catholic!

So, what is the problem with mixing allegorical interpretation and literal interpretation? The instant we must rely on any external authority of any kind to interpret our Bibles we have imposed a humanistic element. Such scriptural interpreters must rely on their highly revered teachers and church fathers. One cannot embrace Calvinism, for example, without the interpretive style of Calvin and Augustine. Literal interpretation, on the other hand, makes no such demands. It simply requires men to take the scriptures literally because the literal interpreter knows that the Bible can interpret itself by itself. Dispensationalists do not devalue the biblical wisdom and insights which God has given to all of His people regardless of their theological camps, but in the end, they require no other textbook than the Word of God, and no other teacher than the Lord Jesus Himself through the agency of His Holy Spirit (1 John 2:20).

Our problem begs a question. Why would serious and well-meaning men of God walk away from the pristine flow of literal biblical interpretation? The answer is that the Bible makes many claims which are not favorable to our fallen way of thinking, even as believers. It demands our absolute surrender and loyalty to its truth regardless of how reasonable it seems at a given moment. After all, that is the ultimate test. We cannot spiritualize a passage in an effort to make it consistent with our rational view. The moment we do so, we are closet humanists. Will we rely on our own wisdom or the wisdom of an enamored leader or will we simply accept what God says in childlike faith? If the name of some man or church defines one’s religious paradigm, he is likely infected with the humanistic virus.

We may rightfully suggest that we are all vulnerable to imposing our own wisdom:

“For after that in the wisdom of God the world by wisdom knew not God, it pleased God by the foolishness of preaching to save them that believe. For the Jews require a sign, and the Greeks seek after wisdom: But we preach Christ crucified, unto the Jews a stumblingblock, and unto the Greeks foolishness; But unto them which are called, both Jews and Greeks, Christ the power of God, and the wisdom of God”. – 1 Corinthians 1:21-25

Whether we are denying absolutes in national government in favor of humanism, or we are rejecting the surgical accuracy of literal (thus dispensational) interpretation while imposing our own interpretive system, the consequences will remain the same. When human wisdom supplants the absolutes of God’s Word, disaster is inevitable (Isaiah 55:8,9). In the end, all wrong thinking is wrong thinking about God. All wrong thinking, however small, leads to wrong behavior. All wrong behavior leads to wrong consequences. The call remains the same to believer and unbeliever alike. We must humbly submit ourselves to what God, and God alone, declares.

Are you new to the Bible? Are your views seemingly suspended between heaven and hell as you try to sort out the realities of life? Begin with the same absolute statement our Lord Jesus declared to doubting Thomas:


[1] In the technical sense, a humanist is one who imposes human reason associated with empiricism and rationalism over divine or supernatural agency.