The Bible Versus Western Cosmology 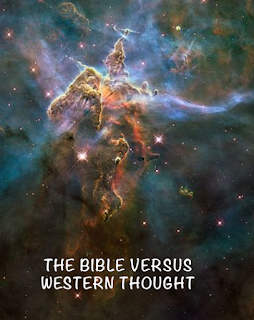 The Bible and Western Cosmology

Don’t be intimidated by the strange sounding title. When we speak of cosmology we are discussing the study of the origin and development of the universe. Although this article is a little more difficult than most, we hope you’ll take the time go get a handle on this all important subject.

While we could begin our study of biblical cosmology in most any book of the Bible, Paul addresses a fundamental point in Romans 8:21-22:

Because the creature itself also shall be delivered from the bondage of corruption into the glorious liberty of the children of God. For we know that the whole creation groaneth and travaileth in pain together until now.

Pay particular attention to the words we have underlined. Our entire creation is in a state of “together change” moving forward as in the travail of a mother in delivery toward the coming Day of the Lord. The term “beginning of sorrows” (Matthew 24:8 and Mark 13:8) are also unique terms which refer to the birth pangs associated with delivery.

When the Bible speaks of the creation, both directly and metaphorically, it makes it clear that sin has actually permeated the creation itself. Bildad commented that even the moon and the stars are not pure in God’s sight (Job 25:5). A close study of the doctrine of the Kinsman Redeemer will reveal that this whole creation is under the curse, and will one day be judged (Revelation 4-19). While God will never again destroy the earth by water, it will certainly be destroyed. Peter announces that this destruction will be at the elemental level. The elements (or first building blocks) of the entire creation will melt or be dissolved with a fervent heat: 2 Peter 3:10-13:

But the day of the Lord will come as a thief in the night; in the which the heavens shall pass away with a great noise, and the elements shall melt with fervent heat, the earth also and the works that are therein shall be burned up. Seeing then that all these things shall be dissolved, what manner of persons ought ye to be in all holy conversation and godliness, Looking for and hasting unto the coming of the day of God, wherein the heavens being on fire shall be dissolved, and the elements shall melt with fervent heat?

Some Bible teachers believe that “new means new” and that God will annihilate the old creation and provide us with an entirely new, unrelated creation. Others, like myself, are called by the unseemly title “renovationists.” In a word, we see the new creation as going through the redemptive process and experiencing its own resurrection (so to speak) from the seeds of its destruction, just as Paul described that we ourselves in our own physical redemption, will be resurrected from a seed of our bodies (1 Corinthians 15:42ff). We believe that, just as sin infected the whole creation, so God’s redemption will restore it after its abysmal destruction.

We hope you do not toss and turn, losing a night’s sleep over this issue. We see through a glass darkly. But, of this, all parties in the discussion should be very sure, this creation, just like our bodies, is waiting for the grand adoption! (Romans 8:21-22)

When looking at this passage and 2 Peter 3 we realize another very important point, concerning which we cannot be so tolerant. We must permanently do away with the pervasive idea that there is a constant of any kind in the creation. Only God is constant.

In an effort to free Greece from the existential despair into which it had plunged the ancient philosophers sought to rebuild their epistemology (system of knowing) by embracing a single basic assumption or first principle. They declared that somewhere, at some level, there was a constant in the creation and that from that constant we could build all of our disciplines of learning. Our entire western scientific mindset is based on this uniformitarian premise, and to this day, we are chasing the ever elusive “god particle” in the effort to locate that constant.

What, in actuality, has science experienced? It has discovered that the entire universe, both organic and inorganic, is in varying degrees of change at all times. Only God is unchanging. The processes the Lord Jesus Christ uses to carry the universe forward are often consistent and predictable, but they are not, by any means etched in stone. Jesus Christ is upholding (carrying forward as in a birth) all things, both physical and spiritual. (Hebrews 1:3).

Science, so called, has fabricated the theory of evolution in order to accommodate this otherwise inexplicable change. In one fell swoop, it observes changes in living things and, pronounces that they are all driven through natural selection, a mystical force that drives all species forward.

Scientific postulations in the world of inorganic evolution are even more preposterous. For example, no generation has been subjected to more fantasy than this generation which endures the pontifications of theoretical astrophysicists! Remember, pure scientists are empirical. They are secular materialists. Take the time to look these terms up if you need to. The first pages of every modern science textbook include a commitment to gospel of uniformitarianism - the principle of constancy intrinsic to the creation. Without it, there can be no science as we know it.

The seeds of western philosophy/science were initially obscured as a result of the spread of the gospel. As a result of its rapid growth many came into “the church” out of philosophical and “scientific” backgrounds. As might be expected over time, their views and the initial views of a once biblical church conflicted.

As the gap between secular and religious thought widened, an extremely brilliant and prolific theologian named Thomas Aquinas entered the scene in the thirteenth century. Though we see some evidence of this thinking in Origin, Aquinas' school of thought (Thomisian theology) would change the Catholic church forever. Aquinas argued that because God is unchanging, His creation must, of necessity, be unchanging. In a word, his love for the great philosophers prompted him to reintroduce the notion of a constant in the creation.

As a result of the impact of Aquinas a series of new notions came into play. The Roman Catholic church, from this point forward, would include multiple authorities (rather than the Bible only) into their teaching. Aquinas’ conclusion necessitated this. Philosophy and science (natural revelation) were placed on an even plane with the Word of God.

It does not take a Bible student long to figure out that these conflicting sources of “revelation” would lead to inevitable confusion. How then, would Rome resolve these issues? It would determine its path by means of the Magisterium, the combined input of the pope, his faithful bishops, scholars, and even the holy wisdom of the full body of Catholics.

What does the Bible say? Peter warned us that coming last day false prophets would deny the biblical promise of the destruction of the creation by using this very argument - that the universe itself is unchanging (or eternal.) 2 Peter 3:3-4:

Knowing this first, that there shall come in the last days scoffers, walking after their own lusts, And saying, Where is the promise of his coming? for since the fathers fell asleep, all things continue as they were from the beginning of the creation.

Peter, of course continues with a magnificent argument, reminding false teachers that God has already proven that He has interrupted the processes of nature and that these liars are willingly ignorant of the evidence God has left behind, specifically, the universal flood. Further, God will most certainly destroy the entire creation in the Day of the Lord.

How can intelligent, and well meaning people, buy such silly nonsense that natural selection can account for the so called forward movement of “evolution”? How can they swallow their constantly self-contradictory dating notions? How can they tolerate the foolish astrophysical schemes which multiply almost weekly? It all goes back to a first principle gone awry. God alone is eternal and unchanging. Their minds are in bondage or imprisoned by their first principle, so they discard anything which does not fit as error.