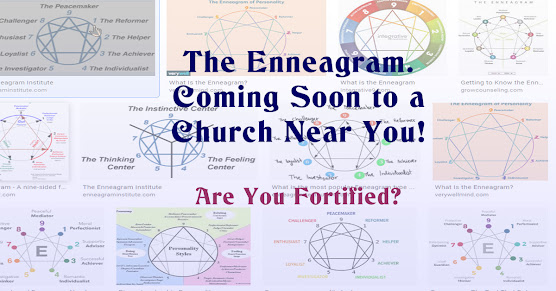 Ho, every one that thirsts come ye to the waters, and he that hath no money; come ye, buy, and eat; yea, come, buy wine and milk without money and without price. Wherefore do ye spend money for that which is not bread? and your labor for that which satisfies not? hearken diligently unto me, and eat ye that which is good, and let your soul delight itself in fatness.  Isaiah 55:1

The Enneagram (pronounced any-a-gram), see the image above, is fast becoming the latest personality tool promoted as an aid to help us gain a full awareness of ourselves and to empower us to recognize our different so-called personality types all the while, moving us toward a new spiritual consciousness. In actuality, it offers a path away from the true spirituality which is found in Christ. Here are five quick reasons why we should become acquainted with the issue now.

1. We will be facing the issue sooner than we think. Thanks to the increasing involvement of evangelical publishers so-called, this fad is taking evangelicalism by storm. Zondervan is slated to release its movie, “Nine. The Enneagram Documentary” in movie theaters in the fall of 2020. Publishers are rushing their books into print while avant-garde pastors are scrambling to exploit this latest wave. (Use your search engine to get a perspective.)

2. The origin of the Enneagram is both occultic and anti-biblical. The roots of this sketchy equilateral triangle arrangement with its irregular hexagram imposing 9 personality dynamics have been falsely attributed to the desert fathers and mothers (not as though that matters.) Its real origin can be traced to the occultist George Gurdjieff from the last century. It was then reworked by others, but non so important as the Roman Catholic Friar and absolute apostate Richard Rohr. It leached, subsequently, into evangelicalism as it was popularized by disciples of Rohr who were mentored by him. These evangelical influencers include Christopher L. Heuertz, Ian Cron, and Suzanne Stable. Other new agers, of course, have weighed in.

3. The fantasized dynamics of the Enneagram offer a false path to spirituality. The apostate Rohr, did not tout this as a self help tool, but promoted it, rather, as a means to strip away our false selves in order to reveal our authentic selves, thus finding our way to our ultimate reality (in true post-modern jargon.) To do so, he, of course, redefined sin, salvation, and a score of other sound biblical concepts. Evangelicals who were then caught up in the Enneagram have extended Rohr and fitted it into the self focused, self absorbed spirituality movement. One such evangelical author goes so far as to label the Enneagram as “the path of redemption.” In the end, the Enneagram is just another Gnostic retrofit which proffers wisdom and special knowledge to those who apply its dynamics. It offers a counterfeit path to genuine relationship with God, supplanting those very biblical truths it claims to support.

4. Evangelicals are seeking to “redeem” the Enneagram for their own use instead of feeding Christ’s sheep with the pure milk and meat of God’s Word. Hours of fruitful biblical meditation and study will be supplanted by yet another pseudo spiritual applique diverting folks from the sweet streams of living water which are available to true, biblical believers. While the believer is called to meditate upon all things pure and good, our Lord severely warns us about drinking from tainted fountains and bitter waters. We cannot “redeem’ a bitter fountain (James 3:11).

5. The Enneagram fad will harm souls before it fades. The Enneagram is just one more fad, one more gateway, into false spirituality and creation based worship system. It is proudly sponsored by those who openly declare that the scriptures are not sufficient in themselves for all things spiritual and relational! Armies of faithful saints, such as Don Veinot and his co-authors who faithfully pointed this out, will soon follow. They will take pen in hand and warn us, but most will not be heard until the damage is done. Trying to overlay biblical truth on a false Enneagram which has a false history, constructed by false teachers promising false results, is as incongruous as using the Book of Mormon to teach the Bible.

“According as his divine power hath given unto us all things that pertain unto life and godliness, through the knowledge of him that hath called us to glory and virtue:” 2 Peter 1:3

Are you ready to fortify yourself? The information in this article has been thoroughly documented in Don Veinot’s new publication Richard Rohr and the Enneagram Secret (Amazon). In addition, you’ll find loads of sound biblical instruction to fortify yourself and your family against the coming wave.

Email ThisBlogThis!Share to TwitterShare to FacebookShare to Pinterest
Labels: Enneagram

Years ago a man walked out of my church and announced “You pastors have been leading me astray!”  When queried, he responded, “You have told me for years that the rapture would occur before the tribulation, and now, Ronald Reagan has been elected president!”  He was, of course, joking with me. As the town’s former mayor, he was also a Democrat.

Coexisting in that church full of Democrats and Republicans was a sheriff, a key Republican (with the number 1 on his license plate), more than one former mayor, some powerful men in our local industries, emergency responders, folks in media, education, and so forth. While this was before the days when the radicals took over party leadership, and no one in our church was pro-abortion, etc. our differences were still pronounced. They were also loving and peaceful.

I attribute this to a line of pastors who, in spite of their warts, all taught that our citizenship is first in heaven and that the love of Christ crossed those party lines and brought us all to the level ground at the foot of the cross. Our children learned and worshiped together. As adults, we all rolled up our sleeves and carried out our evangelistic and teaching ministries and fought the same battles in which all churches engage.

We understand that things are not the same today, but the same spirit of Christ can and must prevail among believers within our assemblies and in the community.  Social distancing issues notwithstanding, it's still OK to hug a Democrat or even a Trump supporter. When we open our hearts we also open doors for good, edifying conversations on tough issues.

“Let all bitterness, and wrath, and anger, and clamor, and evil speaking, be put away from you, with all malice: And be ye kind one to another, tenderhearted, forgiving one another, even as God for Christ’s sake hath forgiven you.”  Ephesians 4:31,32